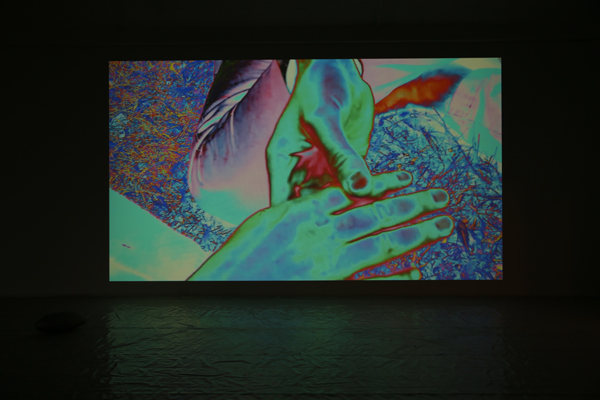 Lea Porsager artistic practice encompasses research into experimental, esoteric and occult ideas and systems. By specifically referring to Georges Bataille’s surrealistic text L’anus solaire (The Solar Anus, 1931), Porsager’s videowork Soil Solarization draws from the spirit of the avant garde. In this work, a day-long alternative Family Constellation (a form of psychotherapy that, by settings up one’s system of heritage, visualises family relationships that are not immediately visible, and thereby it seeks to recognise, acknowledge and, as far as possible, take away possible difficulties between family members) is documented; the family this time consists of ants, ferns, wool, wooden poles and human beings.

Lea Porsager (b. 1981, Frederikssund, Denmark) graduated from the Royal Danish Academy of Fine Arts and Städelschule in Frankfurt am Main in 2010. She began her studies as a PhD fellow at Malmö Art Academy and Lund University in September 2015. Porsager’s practice interweaves fabulation and speculation with a variety of mediums including film, sculpture, photography and text. Her works encompass science, politics, feminism and esotericism: “My PhD project CUT-SPLICE THOUGHT-FORMS looks at the quantum effects of spiritual visions. Situating my research in physicist Karen Barad’s theory of Agential Realism, I explores how the cut-splicing of seemingly conflicting phenomena—quantum physics, spiritual paradigms and lubricated feminism—can serve as trailblazers for radical tentacular thinking and practices.”

In 2012, Porsager participated in dOCUMENTA(13) with the Anatta Experiment. She was awarded the Carl Nielsen and Anne Marie Carl-Nielsen Scholarship in 2014. In 2015, Porsager partook in the 14th Istanbul Biennial Saltwater: a Theory of Thought Forms as Annie Besant’s “medium,” recreating thirty-six of Besant’s watercolors from the book Thought Forms (1905). Porsager’s earthwork and memorial Gravitational Ripples will be inaugurated in 2018 in Stockholm, Sweden, commemorating the lives lost in the 2004 tsunami in Southeast Asia.